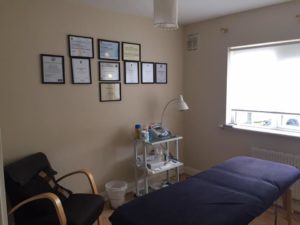 The recession had hit and I always had a keen interest in sports and how the body works so I felt this was an opportunity to up skill. I started by training in Anatomy physiology and holistic massage in the Institute of Beauty in 2013. That course gave me a base to work from. I then studied in sports injury and rehabilitation management in the Waterford College of Further Education. As part of that course I needed to complete  work experience which I got from local junior league club Southend United football club in late 2013.
Later that year I was asked to work for the Oscar Traynor Waterford team. The following year I covered the Waterford inter league team youth team. In 2016, I started to study neuromuscular physical therapy in the National Training Centre.  This would give me more clinical skills to work within my own practice. While studying physical therapy, I was also studying Dry Needling, Cupping, Articular Acupuncture in the College of Acupuncture and Chinese Medicine. I felt by studying the eastern and western techniques with would give me the best of both worlds in treating people.
In 2016, I opened my own clinic in Waterford followed by a Dublin clinic in 2017. I work from both to this day. With my own clinic more opportunities have arisen. I was physical therapist for the Waterford junior camogie team. I also looked after Ferrybank and De La Salle intermediate hurling teams. I’m currently head physio Shelburne FC including the first team.