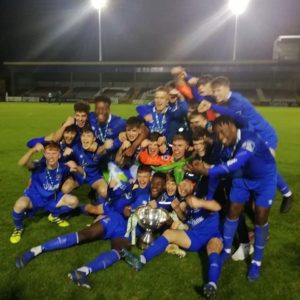 Soak that up! This is the highest level of underage football in the country. This is an incredibly big achievement by the players and coaches. This goes straight into the club’s history books with our other major honours. This is MASSIVE! Congratulations to all of the lads, their families, their coaches all the way through from their schoolboy clubs. These lads are now at the very pinnacle of underage football in the entire country. The best. They deserve every bit of it.

On a bitterly cold night in Eamon Deacy Park, in front of a large crowd, the Blues came out on top in a thrilling clash between two really great teams. Galway had a noticeable size advantage, Waterford had the edge in skill, but both sides produced fantastic football in a full-blooded battle. This game belonged on national television for a wide audience because any football fan would love watching this contest. 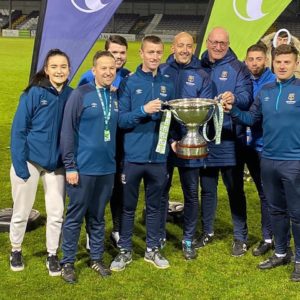 The Blues took the game by the scruff of the neck early. With Cameron Power marauding down the left, two early half chances fell the way of Alex Phelan – side-netting on the right, inches wide on the left. Then a third chance. Niall O’Keeffe with supreme touch and vision played an exquisite throughball and Phelan smashed it emphatically to the net. Galway had prepared well for the country’s top scorer Colm Whelan and were able to neutralise him for large parts of the game, but that opened up space for others and credit to Colly, He maintained his focus throughout and kept chipping away. Star first team centre back Adam Rooney towered in defence, but Whelan twisted him one way and another, Phelan belied a major height difference to out-jump him for headers, and Cameron Power terrified him with pace. The Blues dominated early, but the home side grew into the game and would have been level only for a terrific save by Charlie Heffernan from Wilson Waweru. 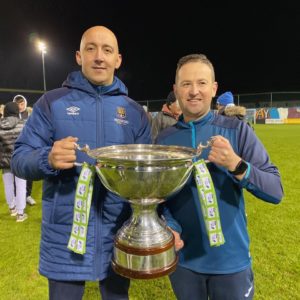 Into the second half and Phelan came so close to doubling the advantage and maybe wrapping up the game when he seized on Rooney’s slack backpass and slotted past the keeper from the edge of the box…..only for the ball to roll inches wide of the far post. It was never going to be that easy and Joshua Keane-Quinlivan levelled the tie from a penalty kick as the game reached its final quarter. The roar that went up from the home crowd was deafening. This was the moment when the Blues could have cracked…..but they never do.

They weathered some pressure for a few minutes, then took control of the game again. With ten minutes to go, Danny Reynolds whipped in a great corner into a crowded box. Up jumped five foot not a lot Darragh Power to win the ball above the keeper and send his header to the net. That looked to be the winner and the floodgates almost opened in the dying minutes with Waterford looking dangerous on every attack. Phelan took the ball on the right flank, ran up the end-line and slotted the third goal home from a tight angle. When the final whistle blew, there could be no doubt as to the merit of the winners. 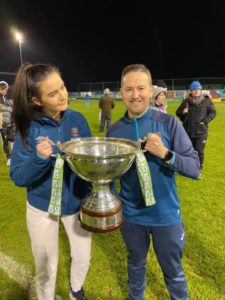 They were worthy victors for their performance tonight and for their displays all season. I haven’t mentioned excellent play all night from Reece Murphy,

Regix Madika and Junior Nzongong. It’s been a full squad effort. That was evident again today with Adham Masood and Success Edogun making an impact off the bench and Greg Waters magnificent when he came into the defence for the last ten minutes. No better man than skipper Dean Beresford to lift the league trophy. He led in every aspect tonight and drove the team on to this incredible success.

A crate of something from Clonmel was delivered into the dressing room after the game and the bus home must have been hopping. I hope this amazing achievement gets all the recognition it deserves. This is front page news. They are the best youth football team in all of Ireland and will most likely be heading for the UEFA Youth Champions League next year with all of Europe’s top clubs. A historic success and an exciting future for the club. F*cking epic!!