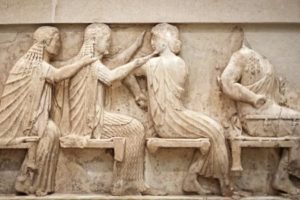 Massage therapy history dates back thousands of years to ancient cultures that believed in it’s medical benefits. The first written records of massage therapy are found in China and Egypt.

2700 BCE: The first known Chinese text is called “The Yellow Emperor’s Classic Book of Internal Medicine.” This book was first published in English in 1949, but has become a staple in massage therapy training and is also often used as a textbook for teaching many other forms of alternative medicine such as acupuncture, acupressure and herbology.

2500 BCE: Egyptian tomb paintings show that massage therapy was also a part of their medical tradition. Egyptians get the credit for pioneering reflexology. Their studies and traditions greatly influenced other cultures such as the Greeks and Romans.

1500 and 500 BCE: The first known written massage therapy traditions come from India, but practice may have actually originated around 3000 BCE or earlier. Hindus used the art of healing touch in the practice of Ayurvedic medicine. Ayurveda, a Sanskrit word, translates to “life health” or “life science.” It is regarded as the basis of holistic medicine, combining meditation, relaxation and aromatherapy.

Early 1800s: It was from this early massage therapy history that the Swedish doctor, gymnast and educator Per Henril Ling developed a method of movement known as the “Swedish Movement System.” This is regarded as the foundation for Swedish massage most commonly used in the West today.

Although the “Swedish Movement System” was developed by Ling, it was Dutchman Johan Georg Mezger who defined the basic hand strokes of Swedish massage.

Where the Industry Is Going

Considering the long history of massage, its incorporation into Western medicine is only in its infancy. The potential for growth and research of the healing properties of therapeutic massage and body work has gained great momentum over the last fifty years, and the public demand for massage therapy is at an all-time high.

As a preventative practice, therapeutic massage is used in spas, gyms and work places all over the country. Using massage therapy to promote balance and maintain internal and external health is something that is now a standard part of the Western lifestyle.

In the health care industry, massage is commonly used in hospitals, nursing homes and birthing centres. It is also used in physical therapy to treat pain, increase circulation and expedite the healing of injured muscles.